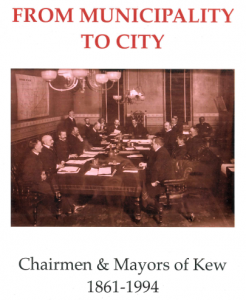 From Municipality to City, Chairmen & Mayors of Kew 1861–1994 is a collaborative history project completed by researchers of the Kew Historical Society. The text includes a contextualised series of illustrated biographical and autobiographical profiles of former civic leaders, which explore the political, social cultural and economic history of Kew from the earliest years of European settlement to the amalgamation of Kew into the City of Boroondara in 1994. Wonderful black & white and colour photos throughout, notes on the photographers, index and selected references.
Cost: $30 + $9 postage
[Copies can be purchased at monthly meetings and at the Kew Court House. Cash or cheque only. Mail order, contact The Secretary KHS.]

All but one of the following publications were written by or had input from Kew Historical Society members. The other, Kew’s Civic Century’ by Cr. W.D. Vaughan, is also available for purchase.

Print copies of many of these publications are available for purchase. Any inquiries, please contact The Secretary,