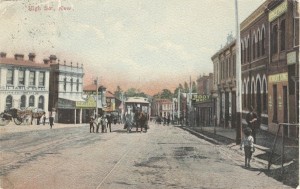 Economic and social history is inevitably interrelated. In Australian history, there have been periods of economic boom and bust, including the Boom of the 1880s followed closely by the Depression of the 1890s. In the 20th century, the Great Depression had a severe impact on many sections of the the local community. The Boulevard in Kew was a ‘Susso’ project during this period of time.

Articles by members of the Society about the economy include:

Kew in the 1890s Depression
After a decade of growth in the 1880s, Australia, Victoria and especially Melbourne, experienced a severe depression. According to Reserve Bank of Australia economists, the 1890s depression was both longer and more severe than the Great Depression of the 1930s. The underlying economic causes of the Depression of the 1890s are complex and controversial, but the triggers that set the Depression off and sustained it are fairly well established.
Part 1:The Boom Ends (PDF, 109kB)
Part 2: Distress in Kew (PDF, 94kB)
Part 3: Relief Efforts (PDF, 94kB)