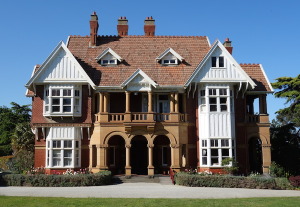 Pru Sanderson, in the landmark ‘Kew Conservation Study’ (1988) wrote: ‘Kew does not have significant nineteenth century streetscapes, but in the mixture of housing styles numerous important buildings remain, and in the individual examples both old and new, Kew’s built heritage is almost a compendium of domestic architecture in Melbourne, from smaller family houses through to grand mansions.’

Articles about houses in Kew include:

9 Highbury Grove [Kew]
In one of our newsletters, we challenged readers to identify a house (right) that was sold in 1919. A number of the Society’s researchers had previously looked at the photograph, focusing on its location and architectural style. While they could find the auction notice in The Argus, the location of the house was unclear.
Read more … 9 Highbury Grove (PDF, 175kB)

Glastonbury [18 John Street, Kew]
‘Glastonbury’, which has occupied the north east corner of John and Alfred Streets for 95 years has recently been sold. Designed for Ernest and Amy Robinson and their family by the architect John Stevens Gawler in 1917 on land that was once part of the Dumaresq estate, the house remained in their family for 55 years.
Read more …18 John Street (PDF, kB)

Kings Bromley [Cotham Road, Kew]
Josiah Joseph Robinson found and purchased a cottage on Lot 82, on land that had originally been purchased by Edward Dumaresq in the Land Sub-division of 1851. The cottage was located on Cotham Road, on the east corner of John Street, which was then just an unmade dirt track.
Read more … Kings Bromley

Ngara [Rowland Street, Kew]
It was probably a surprise to many Australians to learn that Gough Whitlam had a link to Kew. This awareness became widespread with national publicity resulting from the announcement that the house in which he was born, ‘Ngara’, 46 Rowland Street was to be demolished. The resulting debate about the heritage value of the house involved the City of Boroondara, staff of Heritage Victoria and the responsible Minister for Planning in the State Government. The Planning Minister ultimately issued an interim heritage order preventing the demolition from continuing.
Read more … ‘Ngara’ (PDF, 67kB)

The houses of R. G. Menzies
The next house occupied by Sir Robert Gordon Menzies was 10 Howard Street, the best known of the Menzies’ residences in Kew. It appears that the motivation for the sale of Culdares was the opportunity to purchase the Howard Street property from Mrs Bessie Stokes (widow of T. W. Stokes). The 1925–1926 Kew Rate Book records ‘R. G. Menzies’ having a proprietary interest in the property.
Read more … The Houses of RG Menzies (PDF, 105kB)

Wilton [63 Cotham Road, Kew]
These days Wilton is most readily identified as the RSL premises in Cotham Road, and not many people know that it was built as a residence for Dr. William Walsh in 1886, and named ‘Wilton’. After passing through various hands, in 1930 Wilton was divided into four flats and renamed ‘Landene’.
Read more … Wilton (PDF, 79kB)