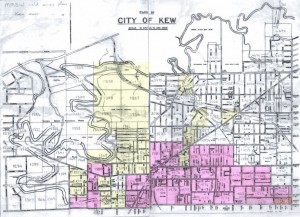 From 1891 to 1991, the Melbourne and Metropolitan Board of Works (MMBW) was one of the most powerful state authorities in Victoria. During that period the MMBW was responsible for sewering Melbourne and its suburbs.To facilitate the introduction of sewerage systems the Board systematically produced detailed plans of suburbs, streets and houses.

A number of the Detail (and also larger) Plans are held by the Kew Historical Society and can be viewed by researchers on request.

The plan (right) shows the number allocated for each part of Kew and East Kew. Numbered sections that are coloured in the plan are in our collection. Sections marked in yellow are the monochrome maps that were originally distributed by the MMBW. Sections coloured in pink are the hand-tinted and frequently annotated maps made by the original contractors. These are unique to the Kew collection.