This page includes original research into the history of community organisations in Kew and East Kew. (For the history of sporting groups, go to the Sport page).

Articles by members of the Society about community organisations include:

History of the Kew R.S.L.
The Kew sub-branch of the Returned Soldiers and Sailors Imperial League of Australia was granted its Charter on 1 January 1920. Its first president was Sam Kilduff, who served with the 24th Battalion in the first World War and was badly wounded in Belgium. The sub-branch initially held its meetings at the Town-hall, Walpole Street, before getting a lease on the former tram sheds on the corner of High and Derby streets.
Read more … Kew RSL / by John Torpey (PDF,kB ) 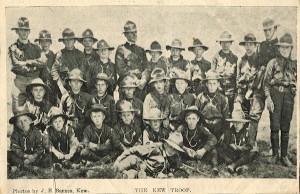 Scouting in Kew
Scouting has long been a part of community life in Kew.  Less than 12 months after the first ‘patrols’ of Scouts were formed in Australia, a Scout Troop had been established in Kew. That Scout Troop, known as the 1st Kew Scouts, is still in existence and celebrated its centenary in 2009. …
Read more … Scouting in Kew (PDF, 115kB)

The Kew Festival
Parades were a feature of each festival. The first festival had featured a grand parade on the Saturday after the Monday Moomba parade. Successive parades took various routes, usually centring on the Kew Post Office, and typically finishing in the Alexandra Gardens. A tram sometimes led the Parade, resulting in the next tram being delayed for ten minutes. When the trams resumed their route, High Street needed to be cleared of participants.
Read more … The Kew Festival (PDF, 397kB)