The Kew Historical Society wishes to acknowledge and thank all donors, past and present who have gifted items to our collection. A number of items donated during the current year are listed below. 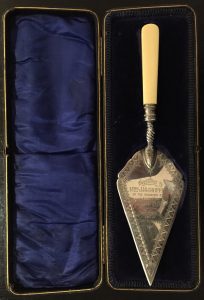 Commemorative objects
In 1905, Mrs J.M. Griffiths laid the foundation stone of a new Baptist School Hall in St John’s Parade (now sadly demolished). The silver-plated trowel given to Mrs Griffiths to commemorate the occasion was gifted to the Society by management of Bupa Aged Care, Edithvale at a ceremony on 24 April.

Photographs
Richard de Vere has donated three photographs of the floods in Kew of 1916. These are believed to now be the earliest original photographs of a major flood in Kew in our collection.

Australian Fashion
Two dresses, which were purchased at Oggi of Collins Street in the 1960s and 70s, have been donated by members to the collection. The first is a turquoise chiffon and taffeta long, beaded evening dress from 1967, belonging to Mrs Ada Wallis of Mary Street, donated by her daughter Desley Reid. [Desley also donated a 1930s fur cape.] The other is a deep cream organza and taffeta wedding dress from 1971, owned and worn by Janet Walker (pictured at right). .

Margaret Robinson has purchased on behalf of the Society an ivory-coloured floral hat designed by Anne Harrison of Kew from the National Trust of Victoria vintage clothing sale at Como House.The hat will be the sixth by this local milliner in our clothing collection. Margaret has also donated a suede skirt by Prue Acton from 1971. The charcoal skirt, with abstract cream and red inserts is described in detail on Victorian Collections.

Documents
Jim Pilmer has donated a 1919 newsletter from St Hilary’s, detailing how parishioners were required to worship outdoors due to the influenza epidemic, and a 1931 auctioneer’s brochure for the sale of Goldthorns, on the corner of Normanby and Argyle Roads.

Manuscripts
Debbie McColl Davis has donated an account book used by the Lionesses of Kew. The manuscript will complement the other minute books, member profiles and objects produced by and for the Kew Lionesses that form part of our manuscripts collection.

Books
Alison Vicklers has donated two historic documents for our bound and unbound archives. The first is a publication from 1921 by W.H. Fitchett – 40 Years at the Methodist Ladies’ College: 1882-1921, and the second is a Kew Primary School magazine form 1980.

Australian Fashion
Kathleen Gervasoni has donated a number of evening dresses and hats to the costume collection. The items date from the 1970s and were either purchased from Kew shops (eg Anne Harrison of Kew) or were worn by Kathleen at official events as the wife of Councillor and Mayor, Jack Gervasoni. A number can be viewed on Victorian Collections. A hat by Ann Austin of Melbourne is the first by this milliner to enter the collection.