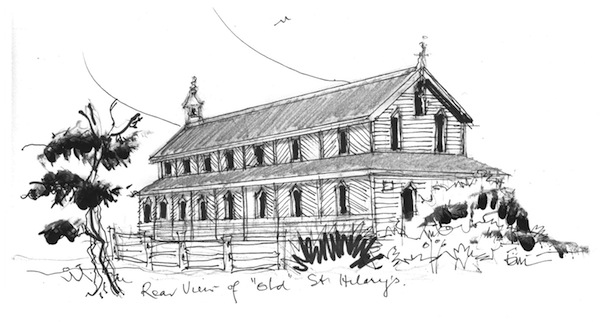 Most historians of Kew including as James Bonwick (1858), F.G.A. Barnard (1910), W.D. Vaughan (1960), and Dorothy Rogers (1973) focus on the development of the mainstream Christian congregations, however there were a number of other religious groups and institutions who contributed to the cultural and social life of Kew.

Articles by members of the Society about religion, churches and synagogues include:

The first St. Hilary’s
The land, on the corner of John and Rowland Streets, lay idle for some time, but by 1888, a deposit of £50 was paid for an agreed purchase price of £600. Mr and Mrs John Wilkinson, and Mr and Mrs Albert Purchas, convened the first meeting of a committee at the Wilkinson’s home in Cotham Road. Albert Purchas’ plans were approved, and a tender of £784 accepted. Building began at once, and the first church service was held four months later.
Read more … The first St Hilary’s (PDF, 393 Kb)

Funeral Rites for Mr Levien
His death notice on the 25 May 1906 had simply given his name as Mr. J. Felix Levien. Most press reports described him more formally as Mr. J. F. Levien. Historians now felicitously give him his full name: Jonas Felix Australia Goldsmid Levien. No press reports refer to his Jewish heritage, yet this is more interesting to us now. He was, reputedly, the first Jewish child born in the Port Phillip District in 1840.
Read more … Funeral Rites for Mr Levien (PDF, 138 Kb)

Eleanor Haidee Simeon
Some of the details of Eleanor Simeon’s life are surprisingly well known; others have remained until now undocumented. She merits three paragraphs at the end of the entry of her husband James Simeon (1815–1874) in John Levi’s chronicle of the lives of more than 1,500 Australian Jewish lives.
Read more … Eleanor Haidee Simeon (PDF, 158 Kb)