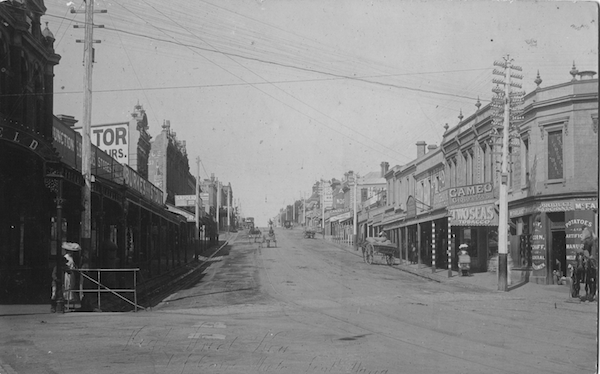 The names of streets often have historical significance. However street names change over time. High Street in Kew (right) was previously known as Bulleen Road and/or Main Street. During World War I, the numbering of houses in many streets of Kew was altered. For example, in St. John’s Parade, the numbering of houses in the street was reversed. In 1915, number 37 became number 6. The Kew Historical Society holds detailed records of the dates on when streets were created or renamed. It additionally holds many of the original subdivision plans, some of which are published on our separate Collections website.

Articles about streets conducted by members of the Society are included below.

Kew Junction: Five Ways
Five Ways is one of the most notable areas of Kew. It was one of the first areas in Kew to be developed, and its importance can be gauged by the three hotels that were constructed there in the nineteenth century: The Woodman Inn (1854), O’Shaughnessy’s Kew Hotel (1855), and the Clifton Hotel (1868). Hotels knew where the action was. The Greyhound Hotel and the Council Family Hotel faced each other further up High Street.
Read more … Five Ways (PDF, kB)

The Streets of Kew 1880-1890
Streets and drains were the basic infrastructure problems for Kew in the 1880s. Decent streets and drains were fundamental to the quality of life of the residents. Without drainage, streets became muddy, boggy and sometimes impassable. Pools and puddles of stagnant water became smelly. The run off water, mixed with human and animal wastes, because there was no sewerage, became a health hazard. Streets and drains then became what were known as ‘a nuisance’. Kew suffered from bouts of typhoid fever during the 1880s.
Read more … The Streets of Kew 1880– 1890 (PDF, 88kB)