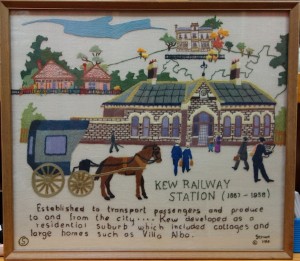 Transport was always a vital concern for the residents of Kew, cut off as they were from Melbourne by the River Yarra. Transport to and within Kew has included boats and bridges to cross the Yarra, and trains, trams and buses to reach the various parts of Kew.

Articles by members of the Society about ‘Transport’ include:

The Railway Comes to Kew
This paper describes the processes used by the Kew community to have a railway built to Kew in the 1880s. It is argued that the Kew community lobbied the colonial government in a half-hearted and reluctant way, unlike other districts in Melbourne. The paper also discusses the issues involved in fixing the route of the railway and problems of construction. The success of the railway is evaluated.
Read more … The Railway Comes to Kew (PDF, 168Kb)