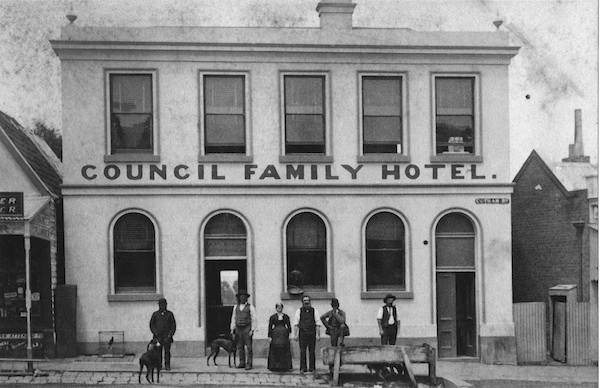 Historians have often debated whether the Woodman Inn or the Harp of Erin was the first hotel in Kew. Both were constructed in 1854. While the Harp of Erin still remains, the Woodman Inn, like many other hotels in Kew, has now vanished. The licensees of the  hotels in Kew, especially those in the C19th led colourful lives. The accounts of these make compelling reading.

Articles by members of the Society about hotels include:

Clifton Hotel
The Hotel Kew, known for most of its existence, as the Clifton Hotel was built in 1868. Its location on the corner of Studley Park Road and High Street at Kew Junction makes it a prominent landmark.
Read more … Clifton Hotel (PDF, 91 Kb).

Greyhound Hotel
The Skinny Dog Hotel, known for most of its existence as the Greyhound Hotel, was built sometime between 1873 and 1874. It is, together with the Hotel Kew (Clifton Hotel) and the Harp of Erin, one of three survivors.
Read more … Greyhound Hotel (PDF, 109 Kb).

Princess Hotel
In an inquest into the death of George Bell after a fight in the garden of his home, the aggressor, Charles Hart was apprehended at the Princess Hotel. Sergeant James McGrath of the Kew Police stated that he finally caught up with Hart ‘as he was coming out of the Princess Hotel at Kew’.
Read more … Princess Hotel (PDF, 99 Kb)

Prospect Hill Hotel
The Prospect Hill Hotel was the fourth of nine hotels to be built in Kew. While the building remains, it now operates as a Dan Murphy liquor license outlet. Built in 1858 at one of the higher points in the suburb, on the corner of Bulleen Road (now High Street) and Little Derby Street (now Cobden Street), for many years the hotel and the surrounding businesses formed a separate business centre from the rest of Kew.
Read more … Prospect Hill Hotel (PDF, 99 Kb).

Woodman Inn
The first mention of ‘The Woodman’ occurred in March 1854, when Joseph Willoughby of Prahran applied to the Licensing Board for an application to open a hotel in Kew. His application was to be refused by the bench until the next licensing day.
Read more …Woodman Inn (PDF, 96 Kb).