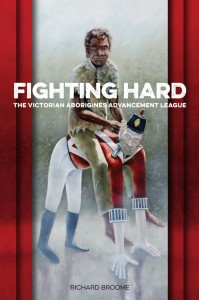 LECTURE TITLE
The Radical Hope of Aboriginal Activism in Victoria

The Kew Historical Society is pleased to announce that Richard Broome will present the third annual Dickinson Lecture in 2016.

Emeritus Professor Richard Broome taught for thirty years at La Trobe University and is the author of eleven books, the most recent being Fighting Hard: The Victorian Aborigines Advancement League  (2015). He is patron of the History Teachers Association of Victoria and Vice President of the Royal Historical Society of Victoria.

His lecture argues Aboriginal Activism in Victoria was a single strand of influence dating to the 1840s, when Aboriginal people contested the occupation of their lands. This activism reflected what philosopher Jonathan Lear called ‘radical hope’, an idea he developed to understand Crow Native Americans, who like Aboriginal people, faced cultural devastation.

A limited number of seats will be available, so bookings are essential.
Purchase tickets by phone (03) 9278-4770
or online www.hawthornartscentre.com.au
$10 members, $20.00 non-members.