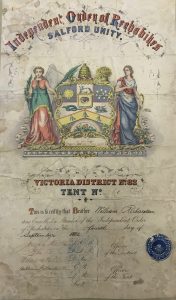 The Society has in its collection a number of membership certificates produced by the International Order of Rechabites. The earliest was awarded to William Horner Richardson. In this example, the illuminated sections – the banner, the large emblem and the generic text – were produced through the lithographic process. The only additional text required was the ‘Tent’ number, relevant dates, and the name of the member. These were added by hand. The Rechabites were founded in the town of Salford in Greater Manchester in 1835, hence the place name in the banner. They were established by 1843 in Australia.

The most interesting aspect of the certificate is the elaborate iconography of the figures and shield, below which is printed: ‘We will drink neither wine nor strong drink’. The shield is flanked by two allegorical figures – an angel of peace and an angel of plenty. The central section of the emblem, the shield, is surmounted by a sword and olive branch, a beehive and a sheaf of wheat. The shield includes a number of symbols including: a sun, a lamb, the all-seeing eye, a moon and seven stars, a coiled snake and two doves. Each symbol is explained in an article by Joanne Paisana entitled The Rechabite Emblem, Rituals and Ceremonies  (pp 24-5). 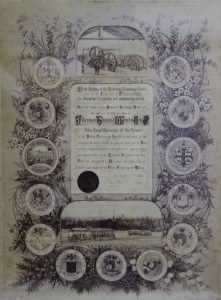 Thomas O’Grady was the first Chairman of the Melbourne Tramways Trust. This testimonial, awarded in February 1886, recognised his contribution to the development of tramways in Melbourne. This unique monochrome lithograph, is mounted in its original frame. Because it is difficult to read this important document it is worth quoting the text in full.

‘At the Meeting of the Melbourne Tramways Trust held on the Fifth day of February 1886, the following Resolution was unanimously carried. That the thanks of the Melbourne Tramways Trust are due and are hereby accorded to Alderman Thomas O’Grady Hon. JP, The First Chairman of the Trust for the Ability, Courtesy and Impartiality with which he has discharged his duties during the past two years, and the Trust heartily congratulates him on the successful opening during his term of office of the Richmond Tramway (the first Cable line constructed in Australia) and tenders him its earnest wishes for his Future Prosperity and Welfare.’

As with other certificates of the period, the first letter of significant words was capitalised and ornamented in Gothic lettering. Surrounding the text, are the crests of twelve local government instrumentalities – the Cities of Collingwood, Melbourne, Fitzroy, Prahran, South Melbourne; the Town of Hotham; the Boroughs of Brunswick, Hawthorn, Kew, Port Melbourne, St Kilda; and the Richmond Corporation. The first of two inset illustrations depict wheels driving the new cable car system, while underneath the text, there is a drawing of cable cars (in Bridge Road?) with St Patrick’s Cathedral and the City of Melbourne on the horizon. The designer typically chose to link the diverse elements of the design with illustrations of flowers and foliage.

Tribute – Token of Esteem of the Star of Kew Juvenile Tent No. 157
Date: 1887
Lithograph
Gift of John Rogers, 1974
Copyright: All Rights Reserved 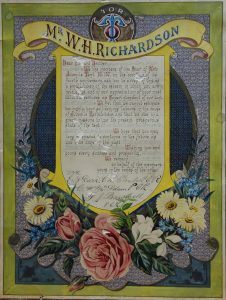 Mr W. H. Richardson was a founding member of the Star of Kew Tent in 1882. The Tent held its first meetings in a mission hall and later at the old Kew Town Hall in Walpole Street. A Junior Branch of the tent was founded in 1883, four years before this tribute was created. Bro. W.H. Richardson was superintendent of the junior (male) tent. Locally, young women in the movement were not catered for until 1904 when the Lily of Kew Tent, No.20 was established. By the end of the Nineteenth Century, the Victorian Rechabites’ had over 36,000 members, and almost 250 operating Tents.

Unlike most Rechabite certificates, which were designed by the parent organisation, this tribute adapts a commercial lithograph. It is now a challenge to identify which parts of the certificate were printed and which hand-painted. The added text is handwritten in ink, with important words highlighted in red. The coloured, floral bouquet in the lithograph appears to be part of the original design. The border, scroll work and IOR logo all appear to be hand-painted. 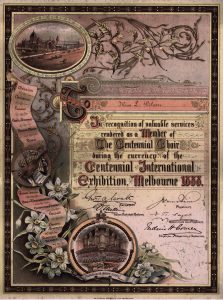 This certificate was printed by McCarron, Bird & Co. It is one of the more ornately designed lithographs in the collection. Only one other example is known, which is in the collection of Museum Victoria. That example has a different colour palette, possibly due to the affect of sunlight on unstable pigments, rather than colour variants in the printing process. Certificates were provided to each of the almost 800 volunteer members of the Choir and so these may be rare survivors of items that became ephemeral over time.

A close reading of the certificate tells elements of the story of the event. At the top left is a representation of the Exhibition Building, in front of which the designer has included a variety of horse-drawn vehicles progressing along Nicholson Street. In the middle ground of this illustration is the Aquarium, built in 1885 and demolished following a fire in 1953. Listed in the scroll work on the left side of the certificate are the names of famous composers and some not so famous compositions. Other illustrations include a group of musical instruments at middle left and a view of the choir and the great organ by George Fincham. The latter was installed in the building in 1880 and then destroyed in stages between 1948 and 1965. Nationalist sentiments are appealed to in the use of wattle in the upper section of the design.

Unlike the well-paid composer-conductor imported from England, the non-payment of expenses to the volunteer choristers led to heated debate in the press of the day. The choristers, who performed on almost 25 occasions during the exhibition, were expected to purchase their own costumes and pay for transport to and from the venue. They were eventually recompensed by a picnic at Sorrento.

You can read more about this items on Victorian Collections 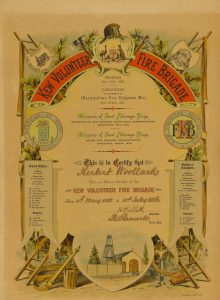 A certificate presented to Herbert Woollard, a member of the Kew Volunteer Fire Brigade during the years 1883-86. Printed by Charles Troedel & Co, master printers and lithographers, the certificate lists in two scrolls the names of the 12 foundation members of the Brigade in 1879 and the members in the year of its dissolution in 1891. Surprisingly, during the twelve-year span of the brigade’s existence, only one member, F.G.A Barnard, lasted the distance.

The local brigade was established by the Kew Borough Council in 1879. Uniforms and a bell were provided by Council and by the end of the first year they possessed a reel and 500ft of hose, as well as a ‘shed’ in Little Walpole-street (now Brougham Street) for a station. Council also applied for the installation of additional fire plugs in Bulleen Road (now High Street). The certificate includes representations of a number of items of firefighting equipment including picks, axes, ladders, buckets, rope and a fire-plug (hydrant).

An interesting aspect of the design is that it includes the only known representation of the original wooden fire station and adjacent bell tower. The central section of the banner also includes a primitive design of the later Commonwealth Coat of Arms, with the words Advance Australia printed underneath. A number of the members listed were also members of the local branch of the Australian Natives Association. The parent association used this emblem and slogan in publicity for their cause.

The local volunteer branch was replaced by a detachment of the Metropolitan Fire Brigade in 1891. A new fire station was completed in Walton Street in 1893, which was later demolished in 1941. 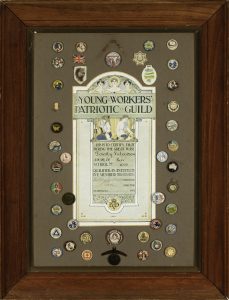 While a number of illuminated lithographs in our collection were clearly valued, only a few were framed. This example was awarded to the 12-year-old Dorothy Richardson, better known under her married name as the historian, Dorothy Rogers (1905-1973). Surrounding the centrally placed lithograph are 42 patriotic buttons issued by various organisations during and following the First World War (1914-1918).

The Young Workers Patriotic Guild was formed in Victorian Schools in 1916. The Australian War Memorial notes that across the Australian school system from 1915 to 1919, the Guild gathered some 80,000 members and raised over £50,000. Certificates were issued by the Department of Education Victoria in recognition of fundraising by individual school children. Dorothy Richardson was 12-years-of age when she received the award. This was two years after the death of her brother from wounds gained during the Gallipoli Campaign.

The subtly coloured certificate includes figures representing of ‘Justice’ and ‘Peace’ at the top, together with a woman’s head wearing a laurel wreath. Beneath the banner, a young girl at left is knitting a sock, while the other uses a hammer and a block of wood. While not rare, its framing and the decorative mounting surrounded by badges add to its historic significance. 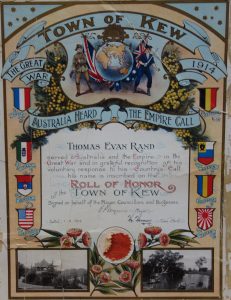 As the First World War drew to a close, municipal councils considered various means of recognising the service of soldiers who had enrolled from their district. The Shire of Ferntree Gully initiated a design competition for a certificate, specifying that: ‘The design may be in single tone or colors (incorporating the municipal seal if possible), to embody local distinction, and to present no great difficulty for mechanical reproduction.’ They offered the winner a prize of £5/5/-.

While the identity of the designer and printer of the Roll of Honor given to returned Kew soldiers has not been identified, it was recorded in the Annual Statement of Accounts for the year ending 30 September 1918, that Council outlaid £45 for an unspecified number of certificates. While highly decorative, the Roll of Honor certificate given to Thomas Evan Rand in 1918 shares design features with those specified by the Shire of Ferntree Gully. This certificate also includes the Council’s seal, it ’embodies local distinction’ in the photographs of the Jubilee Rotunda in the Alexandra Gardens and the picture of boating on the Yarra, and there is extensive use of single colours without the tonal variations of earlier lithographs. Also listed in contemporary newspapers was an advertisement by the Town of Kew for a ‘penman’ for writing names on Soldiers’ Honor Certificates, which specified that Copperplate or Engrossing scripts were preferred.

The actual certificate provided to Thomas Rand of Urangeline in Barkers Road (now Carey BGS) has a blue and gold banner above a globe of the world, with a route through the Indian Ocean, Suez Canal and Mediterranean Sea marked by a thin red line. A soldier and a sailor in uniform holding flags and weapons advance on either side of the globe, while the flags of the other Allied nations decorate the sides of the certificate. While the year of the beginning of the Great War is included, there is no end date. Nationalistic sentiments are conveyed through the printed text and the use of wattle and flowering gum.

We hope that you enjoyed this online exhibition. Additional certificates and testimonials from our collection can be viewed on Victorian Collections.