Melbourne and Metropolitan Board of Works (MMBW) plans were produced from the 1890s to the 1950s. They were crucial to the design and development of Melbourne’s sewerage and drainage system. The plans included in this online exhibition are part of a large group of MMBW plans and maps that was donated to the Society by the Mr Poulter, City Engineer of the City of Kew in 1989. Within this collection, the thirty-five hand-coloured plans, backed with linen, are of statewide significance as they include annotations that provide details of construction materials used in buildings in the first decade of the 20th century as well as additional information about land ownership and usage.

Each plan exhibited lists the names of the streets presented. As the exhibition includes 35 plans, you may like to search for the name of a particular street in Kew using a keyboard search (Control+F or Command+F). 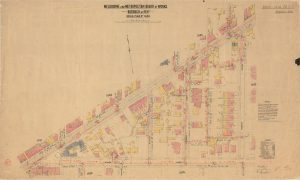 This plan shows the original configuration of the Public Buildings (Kew Post Office, Court House and Police Station), which opened in 1888. While many of the shops on the south side of High street had been constructed by 1903 a number of sites were still used as vegetable gardens. Further along High Street, on the corner of Charles Street, the Salvation Army Barracks can be seen on the plan. These Barracks predate the later Citadel and ‘Young People’s Hall’ that were opened in 1919. At 22 Charles Street can be seen the house of James Venn Morgan. Hailed as the ‘father of Kew’, Morgan arrived in Melbourne in 1840. He was first engaged as a bookmaker, but a fortunate venture on the goldfields enabled him to purchase land in Kew. He conducted a market garden and dairy in Kew for many years.